One of the guys at work was cleaning out a file drawer and came across a few items that appear to have come from an old Mac; one of them is an IR remote control that I haven't seen before. I don't have a camera handy, but did find one like it for sale on eBay & grabbed the photo from there (they sure don't make it easy to do that anymore!) 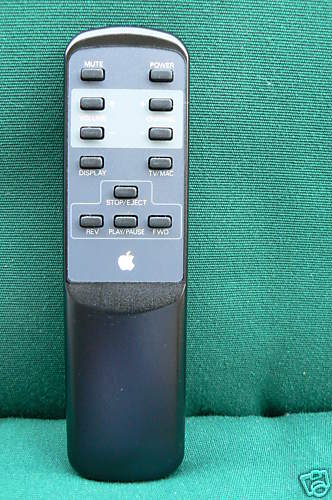 The only Apple identifier on it is the logo on the front; the back has "Made in Malaysia" engraved in the case, and inside the battery compartment is a sticker with "658-0086-A" printed on it. That's pretty much it. Almost looks to be a generic remote that Apple repurposed for use with one of their machines. One of the buttons on it says "TV/MAC", so it may have been from a Mac TV or more likely from one of the Performa models; I remember some of them had IR ports on the front, and was it the 6200 that had a TV tuner built in? I just don't recall ever seeing an actual remote included with one...

Anybody know what it came with? Thanks!

That remote was likely manufactured by Sony, as I recall the Apple remotes use Sony IR codes, Sony commonly manufactures components in Malaysia, and I've seen other Sony remotes of the same vintage that look similar.

My gut feeling is that it's from a Mac TV, but I can't be sure as I've only seen one of those in person once, and don't recall the remote control from it. Apple also used slim credit-card-sized remotes, but I think they were the ones for use with the Apple TV module kit.

... but the box that was unearthed also had a gray power cord and a gray audio jumper cable (1/8" male to 1/8" male), so that makes me think Performa. I only remember seeing a Mac TV once, but I would think they would've come with a black power cord, and wouldn't have a need for the audio cable. Of course, it's anybody's guess whether those parts belong together or were in that box by chance. If it were at my house, no way, but knowing the guy who had them, it's entirely possible.

Those remotes came with the Twentieth Anniversary Macintosh and more commonly the Apple TV/Video System (even though the box cover shows the mini credit card sized remote, the one you have is inside, even the box edge says "your remote control might look different from the one shown here)

I have had a TAM and still have a couple TV/Video Systems in the box.

Those remotes came with the Twentieth Anniversary Macintosh and more commonly the Apple TV/Video System (even though the box cover shows the mini credit card sized remote, the one you have is inside, even the box edge says "your remote control might look different from the one shown here)

I have had a TAM and still have a couple TV/Video Systems in the box.

Yeah, I had a NIB apple tv/video system that I ended up installing in one of my performas. Had a big black remote similar to the OP's picture, but with a slightly different sticker. The box showed the credit card sized one, but I've never actually seen that remote.

The tv video systems were great! I had my PS2 hooked up to it (parents wouldn't let me have a tv in my room then, but I had the computer!) and it came with avid video shop. Was actually pretty impressive even compared to imovie, and it was running on a 68lc040. Strangely the software installed the FM tuner software, but the hardware doesn't support it.

You guys are the greatest; thanks for solving the mystery for me! (I knew y'all would be up to it!)

The other guy knew I collect (hoard) old Apple stuff, and thought this might be of interest to me, and it is, kinda. He told me if it was worth anything he gets a percentage, but it'll probably just go on the shelf with my other odd bits, and wait for a rainy day.

Yes, Sony TV remotes usually work as well. My friend found out the hard way. I sold her a 6400 for her son and it would turn off when she went to turn off her Sony TV.

The Apple remote does not work with OS X.

The Apple AV I/O card came in two editions--for the early and later PM's. The Apple TV was a pretty good program. I use Formac Studio firewire devices to watch TV and video on my G4's in OS X. I use the free Vidi software which you can find online. It tunes AV I/O and records, and if you have one of the earlier silver Formac devices you can listen to and record FM as well.

I installed a PM 6200 IR sensor into a Beige G3 so I could run it off of one of the early Beige G3 Personality cards that had the connector for it. Evidently, Apple had the idea of putting IR sensors on the Beige G3 but dropped the idea--but not until after it had put the connector on some of the Personality cards. Beige G3 "Wings" AV Personality cards have a rear port for the ATI Xclaim AV I/O box, which works great (use the purple box, avoid the earlier white one) when you have your monitor connected through the onboard ATI Rage video port. The ATI software was far superior to Apple TV. I upgraded to a better PCI ATI video card (Radeon 7000) in the Beige and was able to still use the ATI box with that card by placing an Apple DB to standard 15 VGA converter on the onboard video port to convince the ATI box that the onboard video was being used (dual display mode) and just dragged the desktop over to the PCI card output. ATI also made a Rage 128 Xclaim PCI card which worked with the box and produced excellent results with the ATI AV software. Unfortunately, the ATI box and software only work with OS 9 and below. The Apple remote does not work with the ATI software.

I didn't install a TV tuner in my daughter Beige G3. I just wanted it to use the on/off and volume controls on the remote. It only works in OS 9 and earlier.

Unfortunately, the first link in that thread is no longer online.