Touched by the Hand of Woz

I posted these photos on social media last week so you may have seen them already, but I thought some of you would enjoy Woz's reaction when he saw my Apple-1 in Dubai last week: 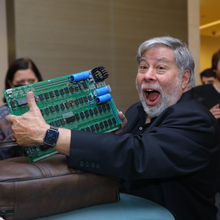 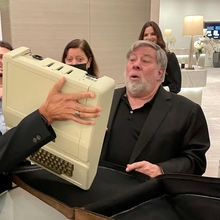 There's a short video someone took that I posted on Twitter. I was suprised by the number of people who expressed concern about letting him handle the board in that way. Yes I'm aware of the risks of ESD etc, but c'mon...it's WOZ!

Thanks for sharing this gem !

This proves that Woz still has much affection for his "firstborn" computer.

I wonder what he thinks about the Apple-1 cloning scene. Which really is the weirdest phenomenon ever observed with vintage computers. Sure, they also make clones of other machines, but these are rare. Apple-1 clones however multiply like rabbits. There must be a special myth / aura about the originals which also shines on the clones.

I had already congratulated you personally. .

You know how lucky you were with Woz signing your Rev 0 and Apple-1. Woz was so excited, he even signed on the chip.

From what I've read about Woz, I can only imagine he's thrilled about the Apple I clones. Not only do they help preserve a bit of computing history, but they're a fantastic educational tool (both for the people who design them, and the people who assemble them). They're simple enough to be approachable by those who are still learning about electronics, but complex enough to be satisfying when one gets their machine working.

"They're simple enough to be approachable by those who are still learning about electronics, but complex enough to be satisfying when one gets their machine working."

However, whoever is reading this, be warned: unless you are an experienced electronics professional, and if you buy the parts from here, there and everywhere, your chances to succeed with the build are slim. But if you can do a decent solder job and can follow instructions and if you buy one of my famous Apple-1 IC kits you will succeed even if you are an electronics newbie and only have a cheap multimeter. All my ICs are 100% tested and burned-in in a real Apple-1 (well, real means "clone"). And as I operate with zero profit margin (I just want to get the money back which I sunk into these ICs) there is no way you can get these parts cheaper, anywhere. I carefully compose these IC kits by hand, sitting in front of an Apple-1, and harvest the known good ones (which were burned in for 4 weeks) to replace them with new-old-stock ICs fresh out of the tubes. So I can tell you that 1/3 of all Apple-1 builds not using my 100% known good kits must fail. This is the ratio of problems I run into while doing this harvest / replacement process. And I know exactly how the Apple-1 works so if something is amiss, I know which ICs could be the culprit(s). And despite of that knowledge, I have to scratch my head more often than not. So if you want to do yourself a favor, get one of my kits. Just contact me over the Applefritter message system to learn how. I will redirect you to a gmail address which I use to coach "my" builders and you will get my "Tips & Tricks" pdf for free which is the best start into building Apple-1, and it will tell you which options you have and where to get the few (bulky) parts not in my kits. I sell them on Ebay, too, but at a higher price to compensate for the usurious Ebay fees, and with less parts in the kit. But all the critical parts which must perform are in all kits. No exception. I want "my" builders to succeed !

About the programming of the Apple-1

I'm now an old guy and I witnessed the invention of the microprocessor and its rise from the beginning. I am proficient in many programming languages and I can do assembly language programming for many, many microprocessors you probably never heard of, including those of my own design.

Here is the bombshell: the Apple-1 is the nicest and most honest machine I have ever programmed. I absolutely love to program the Apple-1. It is so minimalistic that all of the programming work you do on it is --- yours and yours only. The Wozmon has  only a few subroutines you can use but in the end it's only the 'output character' subroutine ("ECHO") you will use for typical programs, unless  writing a new machine language monitor or hex related diagnostics. So unlike every other machine, you have to do all the footwork yourself and when you have accomplished to write and debug a real Apple-1 machine language program (like my Codebreaker game as published here on Applefritter and on Claudio's github pages for his Jukebox) that feat is immensly satisfying. So immensly satisfying that I never experienced that ever before when programming any other machine. But the Apple-1 has that "magic".

You don't believe this ? Then just consider the current so-called "state of the art" in programming so-called "apps". You work in a "framework" using weird languages like C++ which are overly complicated and impure, you use class libraries written by lowly paid programming slaves from India and elsewhere in the world (death to these greedy corporations) and the whole morass your compiler vomits out consumes some 100 megabytes (if not gigabytes) of memory, encompasses tens of millions of lines of dubious, low quality code you can't inspect even if you had the source code (which "they" don't give you) and the whole morass runs on top of an operating system which also has tens of millions of lines of code you can't inspect neither and consumes gigabytes of memory. And all that just to play 'Candy Crush' or some other nonsense. (OK, there is some really great software out there which needs that platform, such as the X-Plane flight simulator I use to keep my skills as a private pilot sharp, but for most of the software I see nowadays, I really shake my head in disgust and get turned off by it, along the lines, "did we really need to get there to do this in that way ?").  It's. Just. Too. Much. Actually, it's "Idiocracy" (watch the movie of the same title). Simplify and automate until even a moron not able to read and write or reason can do his/her/its job or - God forbid - even do "miracles". Until he/she/it ("gender fluid") can't. Because the app breaks or does weird things nobody can explain. Then reboot. Rinse and repeat. While the reboot runs, our whole civilisation comes apart at the seams.

IMHO, with the current state of the (hi tech, hi stake) technology they won't be able to fly men and women (and "trans") to the moon anymore and safely bring them back to Earth. If they ever try this feat again, my money is on a huge disaster and loss of life (and loss of the mission and loss of all the money that went into it). 50 years ago the technology was just right: powerful enough to do the job, and robust/simple enough to be reasonably bug free and radiation hard.

We have lost all of this.

So you can now understand why programming the Apple-1 is bliss. For me, a sort of Shangri-La.

Wow your ventless Apple II is in great condition from this picture.  Mine isn't as good.    Capturing Woz's expression is priceless.

Can you see the "file" marks on yours where Dan Kottke "modifyied" the case so the keyboard would fit without binding?

As for Woz's opinion on both replica, clones and reproductions; In my conversations with him, he seems to love the idea.  Remember he gave out the design because the Apple-1 dated back to Apple as a LLC when he was one of the partners and could do that.  With the Apple II, that was "owned" by Apple Computer Inc. corporation, where he was just a founding share holder.

Thanks...this is the same Apple II that was posted about some years ago by the previous owner: 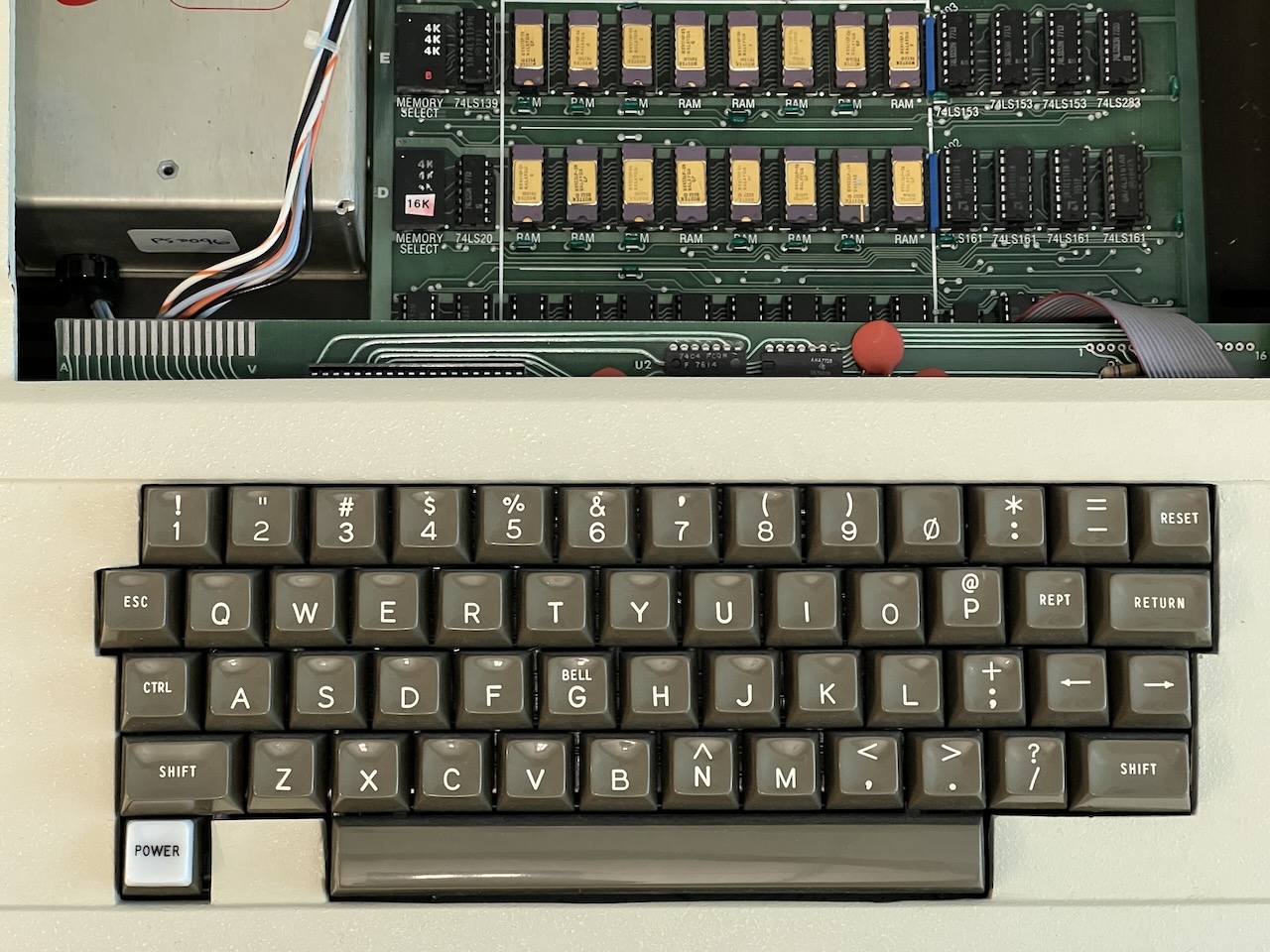 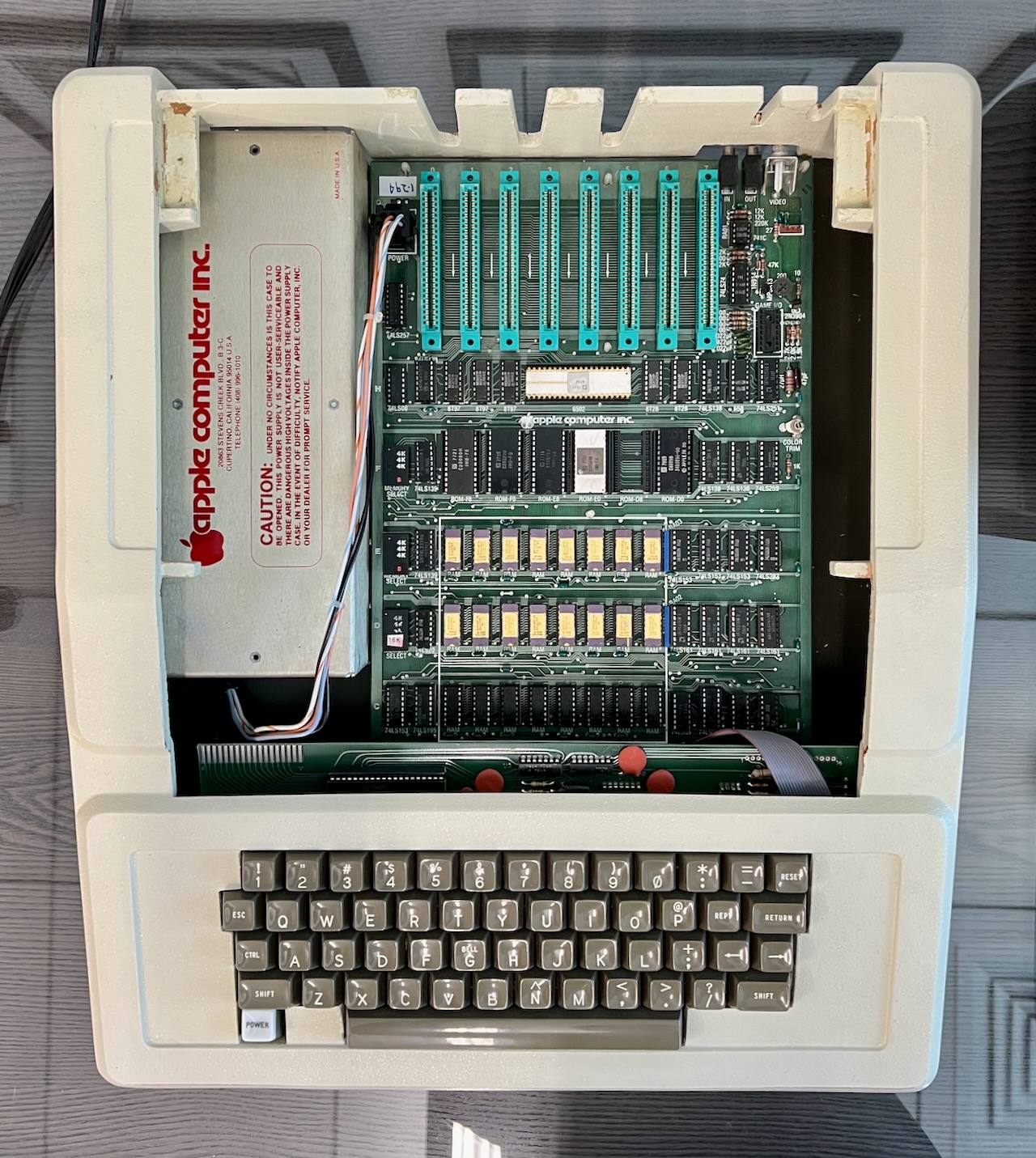 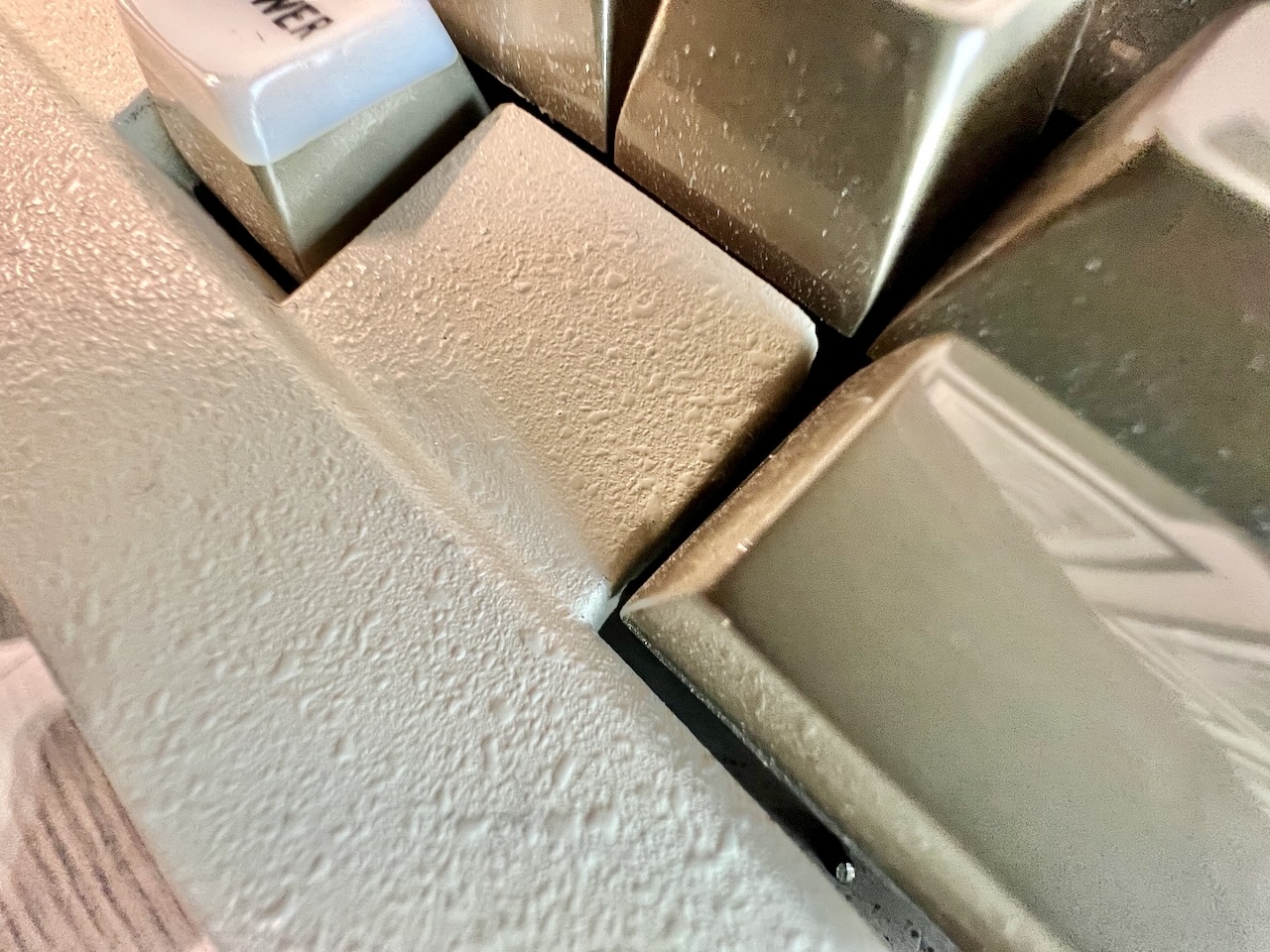 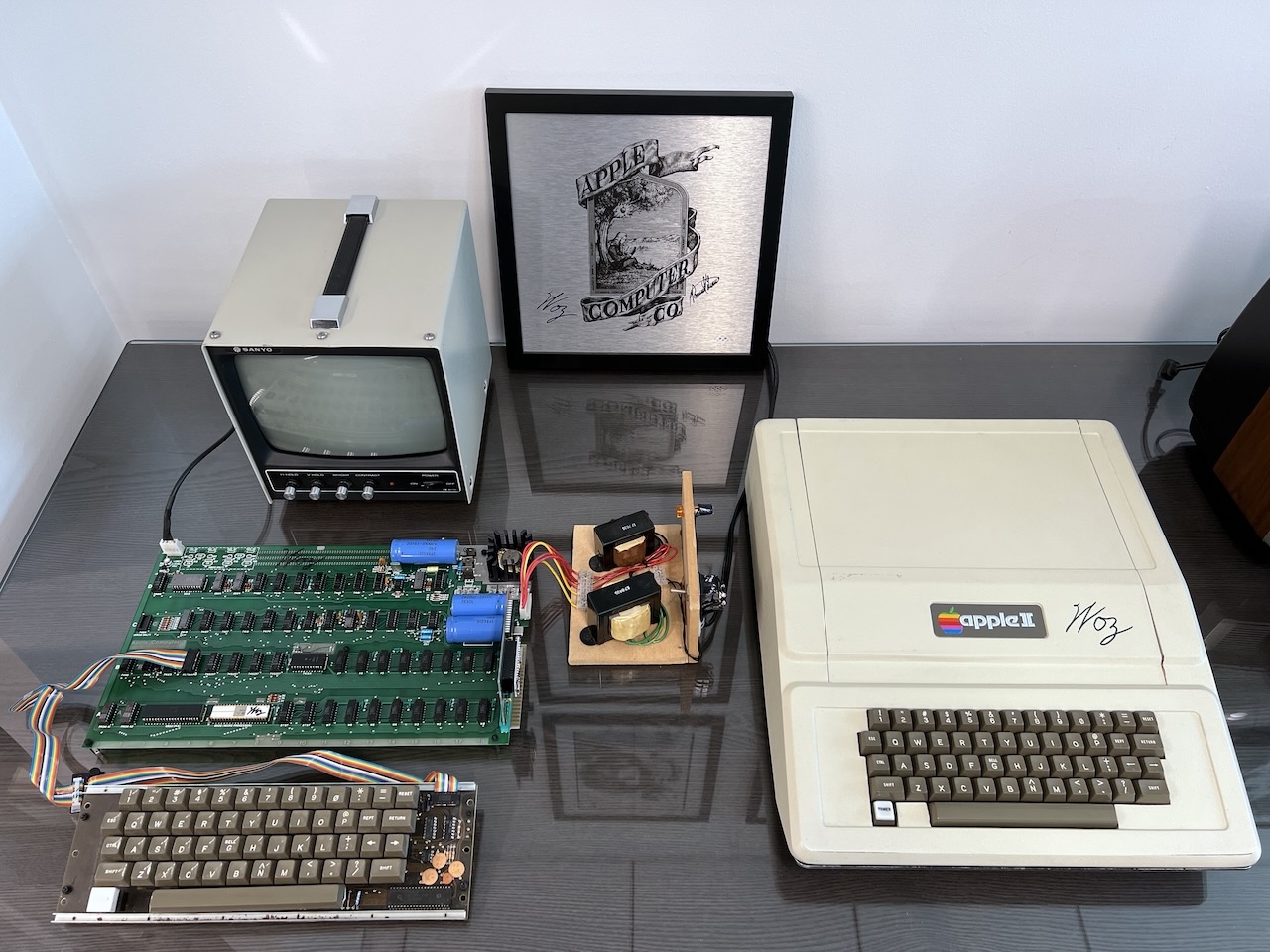 Very well said Dr. Webster! This was the EXACT case for me being an 18 year old in this specific field of electronics! Also so jealous that you got your Apple-1 signed. But happy for you!