I've just recapped the PSU on my Apple IIe platinum and I was wondering if I should also replace the axial caps on the motherboard? If so where can I get them at a good price since they are very hard to find and not cheap.

I see no reason to do that unless you have a driving urge. TBH, I have never had to recap a //e mainboard at all. The caps on them are fairly solid, and I have quite  lot of them. The only one that is not working is one that literally was in a fire, and even that, I could likely repair and never need to recap.

If you decided to move forward with the mainboard recap, you can generally make radial caps fit in axial locations.  In some cases you can simply spread the leads out and lay the cap perpendicular to its original orientation.  And in others, you can form and insulate the leads to simulate an axial cap.  Below are two such examples. 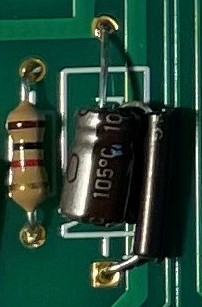 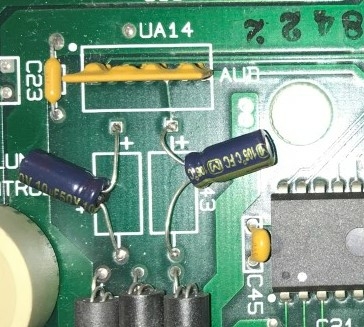 As Timelord mentioned, generally these caps that are in logic circuits tend to fair better than caps subjected to harsher environments like PSU's and CRTs.  Many of them are still good.  But the question you need to ask yourself is, how long will they be?  Some could fail a week from now, some may last another 20 years.  And caps can fail without leaking or bulging, so visual inspection is not always proof a cap is good (but it is definite proof it is not).  There is also a chance a cap has lost some of its characteristics and is still working, but might not be working as well as when it was new.  Cpas can also become "leaky" eelctrically, not just the fluid leaking out.  And you can't see that.

The other part that can weigh into this is  how comfortable would you be replacing them 20 years from now if needed?  Me personally, I tend to replace them now more often than not.  Reason is being in my mid-40s, my eyesight and motor skills are still in good shape to do this kind of work.  I don't know what they will both be like in 20 years.  PLus its the piece of mind that these new caps should outlast me.  Any failures will be long after I have failed, and be the next guy's problem.

But that is just my opinion.  Ask 100 people this question, you'll get 100 different answers and justifications for their answers.

Those capacitors are high quality and are not operated anywhere near their design limits.

Recapping the power supply really accomplishes nothing. Those caps are also high quality, operating well wthin their voltage and temperature ratings, and I have never seen one fail that wasn't caused by something external.

Thank you all for the feed back and I'm convinced to leave the original caps on the motherboard. Now I have to tackle my next problem, finding why the MS Softcard doesn't get recognized in any of the Apple II models I have