A travel through time for those interested in the history of the Disk ][ ...

One of my long-time goals was to try and replicate the Disk ][ controller that Woz originally designed.Part of it was the challenge, part was to see what Woz went through and the differences thatthis board has from the production board produced by Apple.

It took me a while to sort out those differences.  You'll note there are a few less componentson the Woz built board as with Apple's production board.  That, and the chips he used wereslightly different as well.  I noticed on the oldest of Disk ][ production boards, Apple useda 74LS259 in place of the 9330 chip used on most of the Disk ][ driver boards out there today.Interestingly, from what I could tell, the schematic diagram Apple released was almost pin forpin identical to the hand-built Woz board.  Missing was the transistor "switches" that powereddown the D-Flop storage register and P5 PROM. On the Woz board, they were always powered on.Also, it appears there is a missing pull-up resistor between pins 9 & 10 on the hand-wired board.I could not see it in any archived photographs.  The 74LS05 is an open-collector device andwould have likely contributed to some level of instability without that pull-up.

The two 555 ICs were replaced with a single 556, reducing the chip count.

A note-worthy story regarding the Apple ][ Disk Drive here:https://www.cultofmac.com/520125/woz-apple-ii-disk-drive/

You'll note that the article talks about Woz spending December 25th, 1977 working on the Disk ][prototype, but if you look at the photo of the original board Woz built, it's dated 24-Feb-78.Something is not right about the story.  This distinction is also noted on Wikipedia:https://en.wikipedia.org/wiki/Disk_II#Disk_II   Everything I have found in searches indicates Wozspending his Christmas Holiday building the Disk ][ interface, so why is the original board dated24-Feb-78?  Either this is not the original board, or he built this prototype as a pre-productionmodel.

Here is a link talking about the original hand-wired (by Woz) Disk ][ board...http://www.apple1notes.com/old_apple/Huston_Stories_files/HandWired%20Woz%20Disk%20Controller.htm

I like this article because it describes the board in-brief fairly well, though without photos.I believe it was the description of the board when it went for sale several years ago for about 15K.I believe Woz originally used this board to "settle" on his 13 sector scheme, as there is evidence onthe board itself that he moved some traces around using a different color wire wrap (blue noted) ...likely because that's what was readily available to him at the time.  The P5 PROM is missing from the boardwhich makes sense because that's the PROM that determines 13 sector from 16 sector R/W's to the disk.

Interesting article with a photo of the Disk ][ Drive & hand-built by Woz card:https://dynamicsubspace.net/2015/09/15/debut-disk-ii-ambiguous-terminology-memory-digging-deeper-into-an-anecdote-in-matthew-kirschenbaums-mechanisms/

The only place I could find a decent photo of the back side of the board. (scroll down the page)https://bitrebels.com/technology/vintage-apple-gadgets-temporary-museum/

By itself: PCB back-side: https://bitrebels.com/wp-content/uploads/2013/02/apple-computer-rare-products-7.jpg

This was an interesting build.  Worth my time.  I enjoyed learning a bit of "hands-on" history.The original Woz-built Disk ][ Driver board works fine on both 13 and 16 Sector, and I was able toboot up ProDos without issue with the 16 sector PROM installed.The 555 timer circuit pulse for the power-on Reset circuit was considerably shorter than theproduction unit.  This became obvious with the circuit using a 0.1uf capacitor on the Woz board vs.a 22uf capacitor on the production board. Sometimes the computer wouldn't reset properly upon power-up.The 74LS259 "8-bit latch" used in the Woz board is virtually identical to the 9334 chip used on theproduction board.  I'm unsure why they changed it but I'm guessing it had to do with timing consistencyor drive current. (fan-out)

Picts:  Original Woz hand-built board, followed by my hand-built replica. 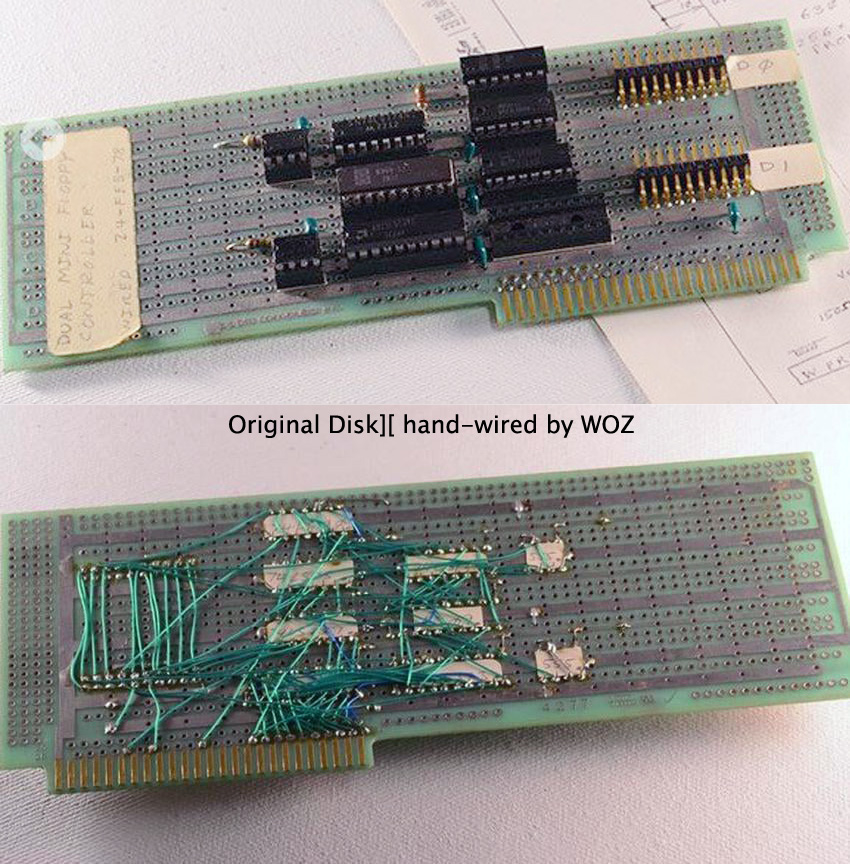 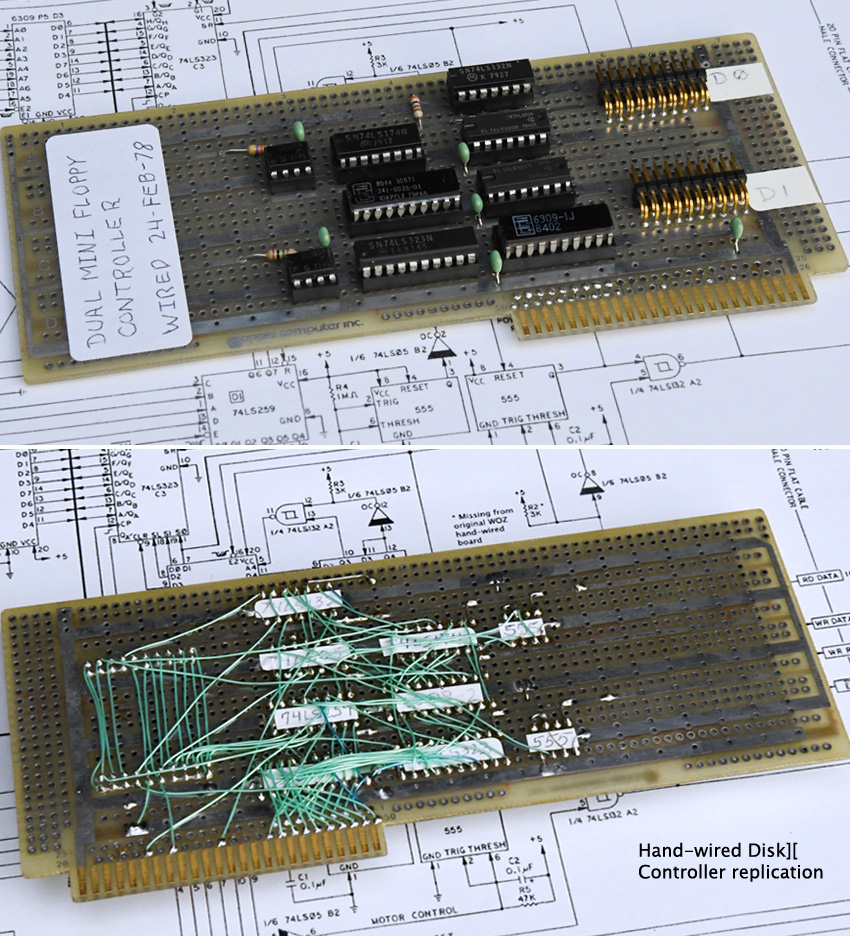 Nice work! Thanks for sharing. That was an interesting read through the links and your description.

While it's very likely that Woz worked on the disk ][ implementation over Christmas break, it's also clear that work continued into January and beyond.  The fact that the prototype differs from the production unit, is evidence of that.  I think the evidence points to that sticker being added when the team thought that they were ready to freeze the design, not when it was initially constructed.

Mike, thanks for your comments ...

Re: I think the evidence points to that sticker being added when the team thought that they were ready to freeze the design, not when it was initially constructed.

The only thing I can think of that may counter that is that the labels placed on the board appear to be in Woz's own handwriting.

That, or (as you say) he continued to refine the design after the Holidays and placed that dated tag to the board when he finished.  There's write-ups that say he was working on improving sector mapping after the initial design, so that might have come into play.  Maybe someone who knows Woz can ask why the board was date-tagged later on?

Do you really remember which one the original is/was  :-)

boards that were used in the very early production of the Disk ][.  Notice the similarities?  I was a lucky to find these.  I thought

this would complimant the Disk ][ Card replication.  At some point, I will be installing an original 13 sector PROM into the

card and connecting the drives using un-shielded rainbow wire.  Should be a close replication of the original setup. (hopefully)

Might not ever see another set of Shugart drives like this. It's likely I will use an Apple Disk ][ cover over the drives to protect.

Not sure what to do with the plain faceplate though. ;-)  j/k 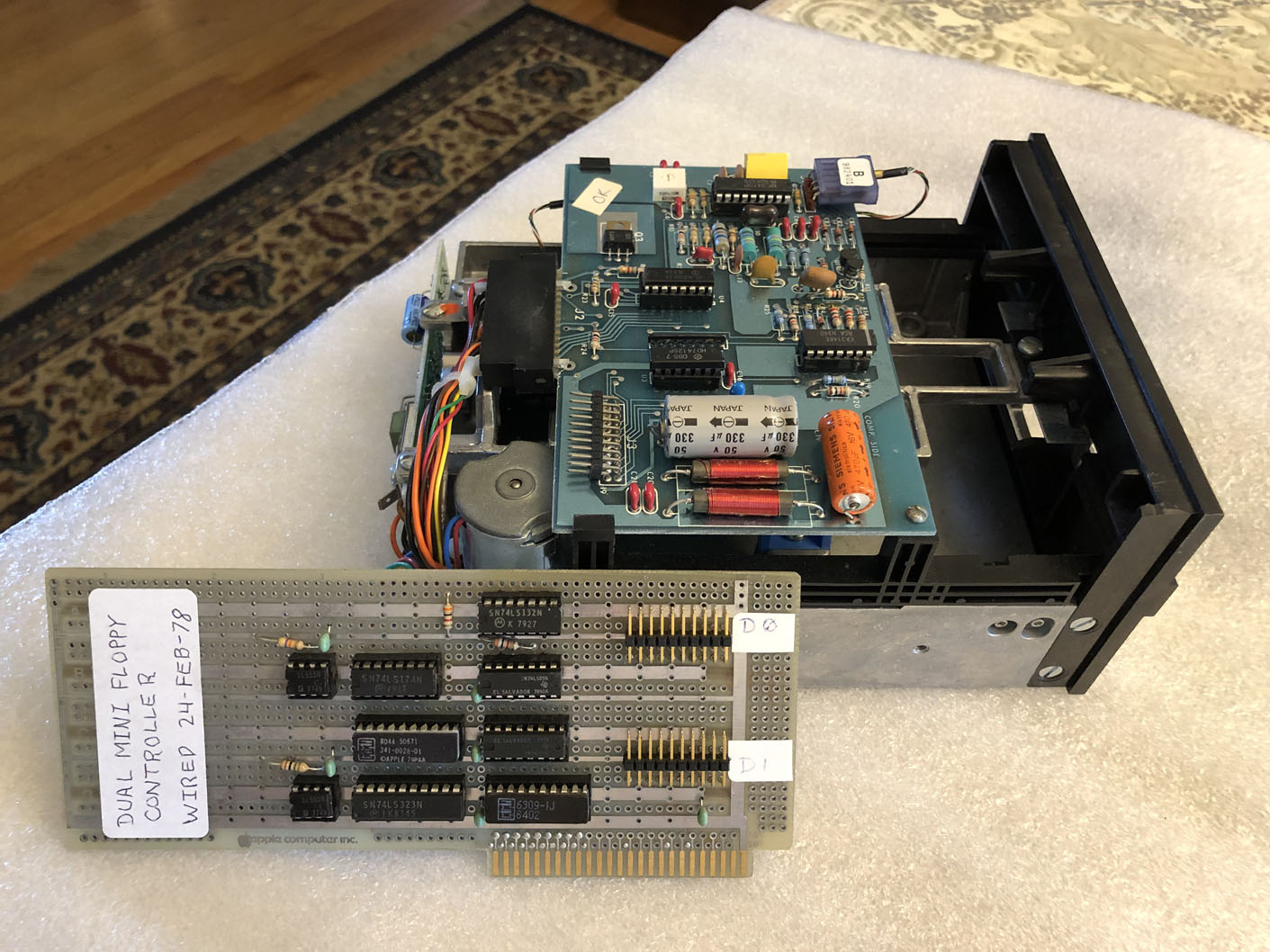 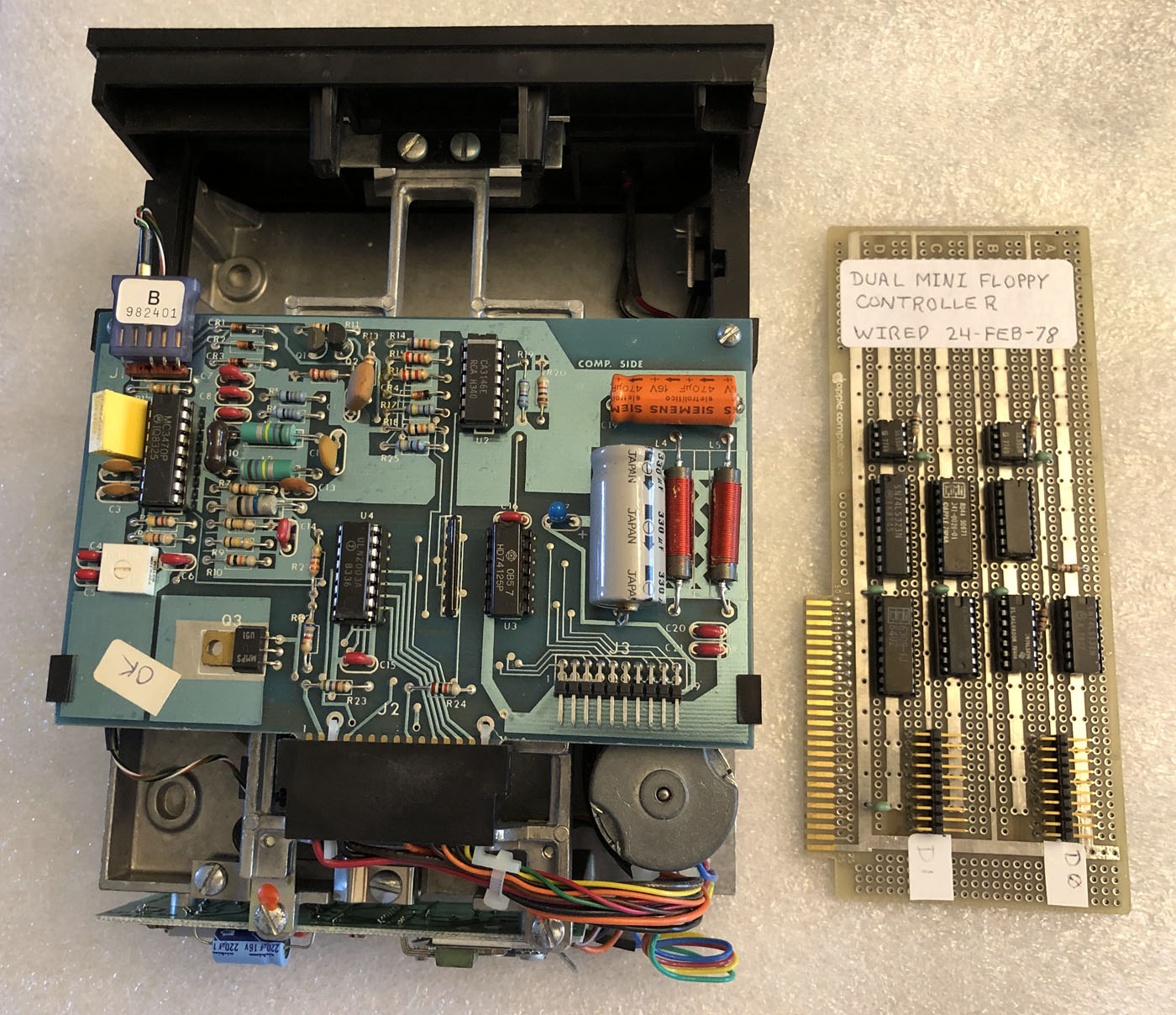 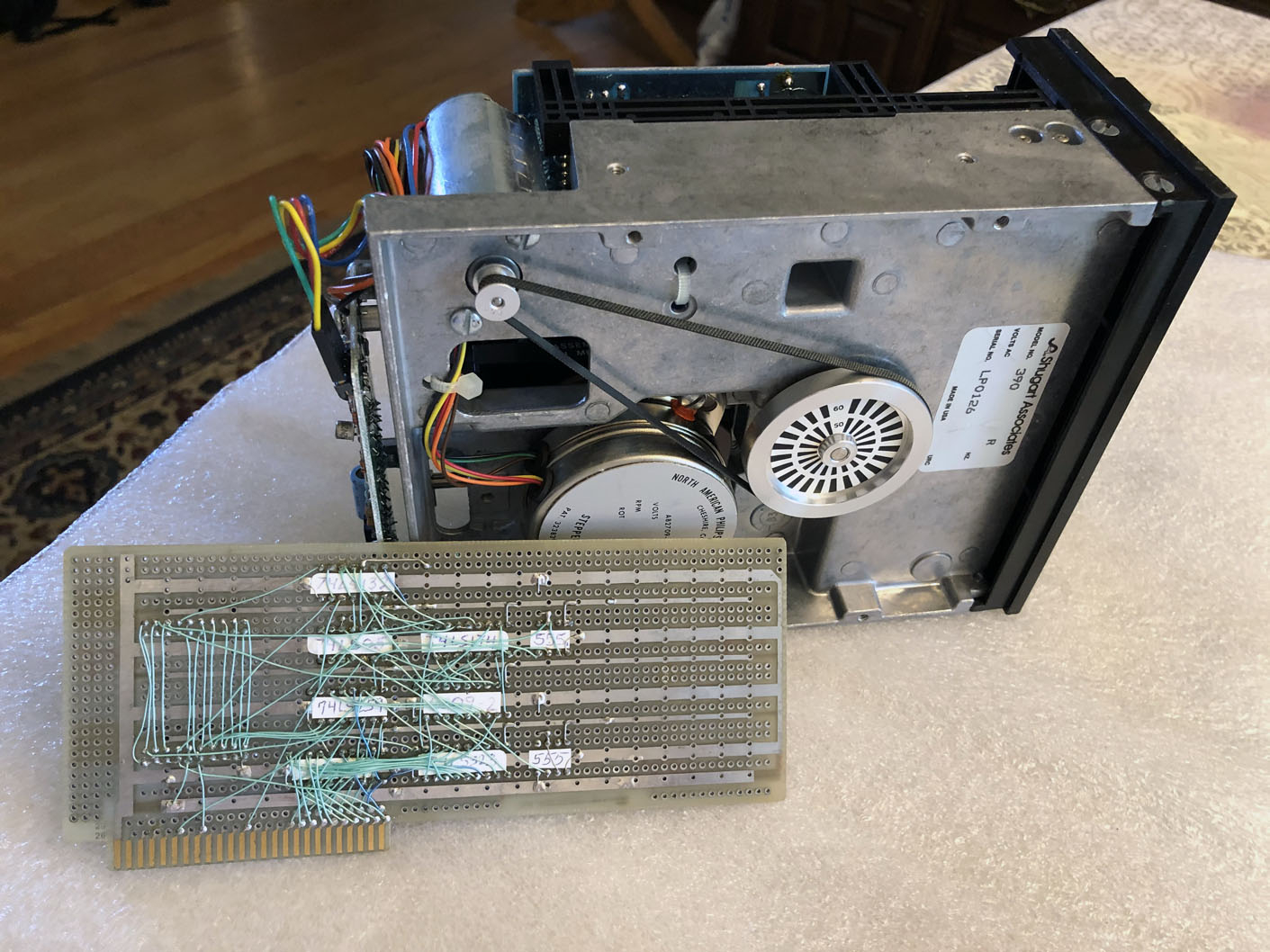