Interest in affordable ProFile Controller or SilenType Card for ][ Series?

I finally found an affordable ProFile card. I plan to make schematics for it ere using it, and I will probably publish them for free, but that aside, is there any interest in making a run of ProFile cards? These bastards fetch £200 to £400 on eBay, and there is no reason that they need to be that costly if your only goal is to be able to use a ProFile.

Of course, I will need to see if there are any PROMs or logic chips that I cannot dump and replicate, but it is not a complicated design AFAIR, and if I can pop out a run of copies, are any of you interested?

I also feel like making a SilenType card clone, so, my work slate for making schems and clones is:SuperSprite

I haven yet to start on the SuperSprite, as I have had a lot of things to do and it is rather complex, but these other two are far simpler.

I'd only go out of my way to CAD out a production run if there are people who want/need them.

Timelord, I am interested!!!  I have been on the hunt for an Apple II profile card for some time but will not pay crazy prices. I know someone in Canada who specializes in burning old proms. I had them burn me a couple APPLE /// proms a few months back. I can give you the info.

I own a silent type printer but havent tried to use it yet. Do you need a special card to run it? I thought it was just serial!?

Timelord, I am interested!!!  I have been on the hunt for an Apple II profile card for some time but will not pay crazy prices. I know someone in Canada who specializes in burning old proms. I had them burn me a couple APPLE /// proms a few months back. I can give you the info.

I own a silent type printer but havent tried to use it yet. Do you need a special card to run

The SIlenType requires a specific interface card. I own two of them. Once I verify operability, I will slate them for schematics. The printer itself is based on the mechanics of an identical thermal printer, but with a different internal controller board.

Here is a photo of what is on the ProFile card. If you want to take an hour to ID chips that require special decoding and programming other than the ROM, that'll save me some time. Aside from the ROM, everything looks off the shelf, unless I am missing something.

Insofar as cost, I would probably sell the board itself with a parts list, unless there is enough demand for kits. The board that I ordered had a 5MB ROM and my drive is 10MB, so I need to r/r that just to test it. I also need to verify that my ProFIle still spins up, and if not, to go in and restore it. It should, but it has been sitting for quite a while.

I should have nabbed the 5MB drive that was on eBay for US$240 last week, but it seemed an extraneous expense as I only plan to use it on one system.

Here also is the SilenType card: 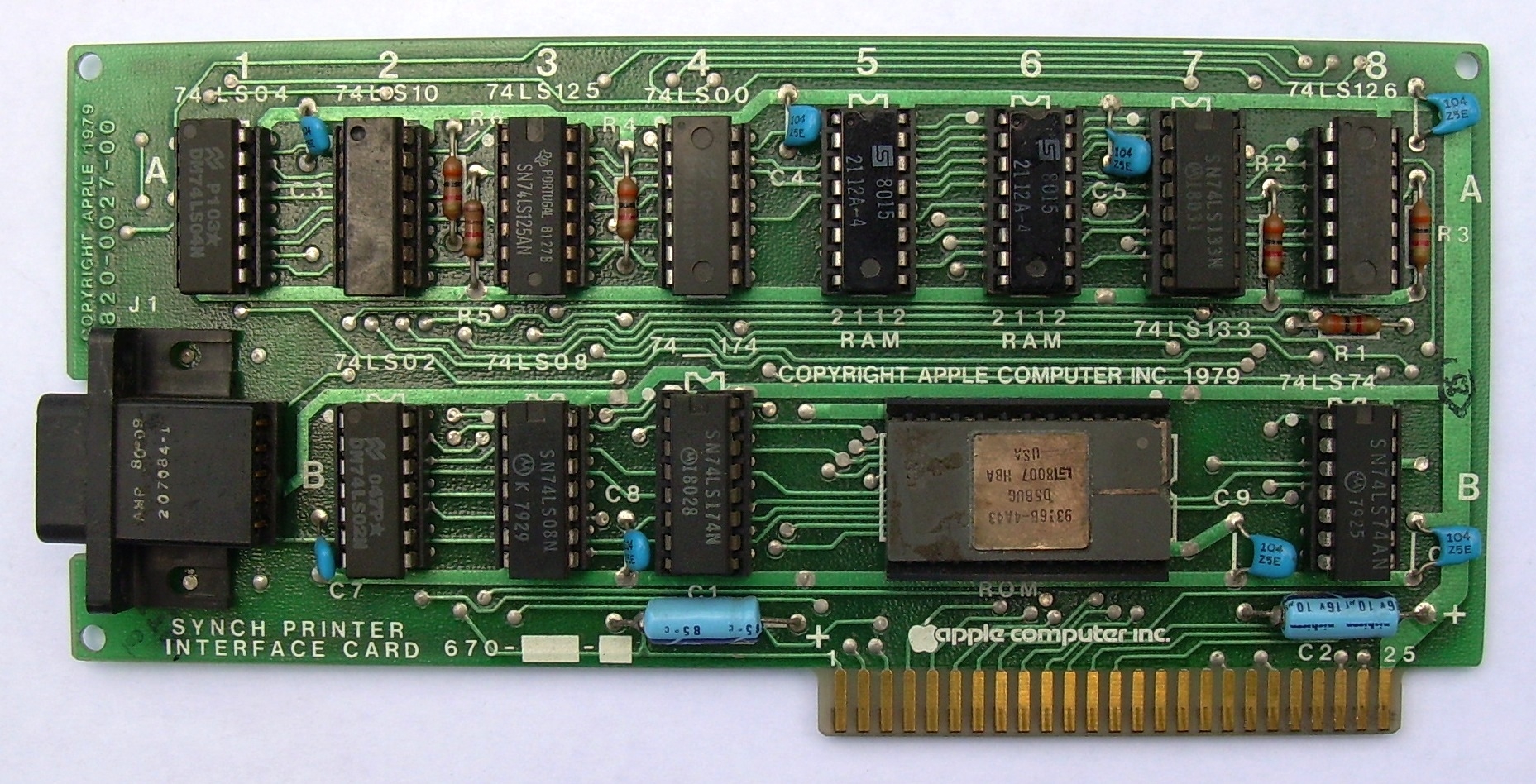 A dot it yourself kit is fine, I would just include maybe some of the lesser common parts like resistor packs, maybe even resistors. They are so cheap. Its nice to have at least some of the components.

You could always just release a BOM on Newark or Mouser to make it easier for people.

By the way if you are making a silent type card.. Count me in for that too.. Since I just learned I need one.

A scan of the original Apple schematic for the Profile interface card is available from the usual places, though of course to create a new card one would probably want to enter the schematics in a modern EDA program. I thought the synch printer card (for Silentype) schematic was available, but at the moment I'm not able to find it. Note that the Apple II and Apple III interface cards are considerably different. The chips are all common.

The Silentype card has a relatively exotic (nowdays) chip, a pair of 2112 static RAM (256x4). Most likely these can be replaced by a modern bytewide static RAM.

The "10MB ROM" for the Profile interface handles the 5MB Profile just fine as well. I've disassembled the firmware, and there appeasrs to be a remarkable amount of dead code present. I've built a ROM image with the dead code eliminated, but I haven't yet tested it.

I would be interested in purchasing a built or kit to build a replica Apple II Profile interface card. I had one for a while and a few years back another Apple II user/collector really wanted one. Back then, I used it once or twice, but not very often and so I sold it to the Apple II user/colllector. I still have the Profile drive and would like to get it working again and need an interface card.

The ProFile card arrived. I will be testing it not only with my 10MB ProFIle, but I also luckily managed to obtain a second, 5MB drive for around £150. I will work on these over the winter and spring. I have a silentype printer, with two SilenType cards. Once I test that, and the profile card/drives, I can make plans.

I still plan to work on the SuperSprite card, but it is on hiatus due to its complexity, projects on the bench, and other things in my way. I have yet to even test it.

I will need to dig out the Apple Ii edge connector file, and begin making a base board design in KiCAD. Is there an Apple II full size board template for KiCAD, while I'm at it? I probably need to fab or order some of the prototyping cards too, to hand wire them and test my designs.

My goal is three or four cards, so, aye. It will be a slow process. I need to check is all of my HW works in each case, before I cazn start cloning it. I now have two SilenType cards and a printer, so once I test the printer with one or both and verify that it works, I can make a proto design with wire wrap; and once I knot that to work, then I can make a proper PCB.

After all of that, I need to test and verify the finished product, and if it works, I can offer it either as a kit of as a Gerber/KiCAD file.

Note that these will be 1:1 copies, using the same ICs as the originals. I will not be re-engineering or reducing them for more modern components, as that both requires more time, and it could potentially risk damaging equipment if my output is imperfect in some way. Thus, I will only use components found on the original boards, as these are known good configurations.

It will be a few months at the least ere I am ready to produce any of these. I posted the topic to see if I should invest any time in this beond my own needs. I can personally use additional ProFile cards, but I likely only need the two SilenType cards that I already have.

I also feel that I should note that I need to ensure that my original cards work properly, and if needed, repair them ere I can make a design file for any of them. I do not want to risk something like the ProFile analogue board or the SilenType control board on a guess.

The Apple II Profile interface doesn't use any exotic components.

There are two EPROM revisions for the Apple II Profile interface. The collective wisdom of the Internet thinks that the older one is only for the 5MB Profile and the newer one only for the 10MB. I've reverse-engineered the code and found that actually the newer EPROM supports either size of Profile, because it obtains the size from the Profile rather than being hard-coded for 5MB as was the old EPROM. However, I don't have a 10MB Profile to actually test, so perhaps there's some chance that it could have a problem. The newer EPROM might also work with the Widget drive, as used internally in the Lisa 2/5and Macintosh XL, if wired up with suitable cabling. It would probably also work with the unreleased 20MB Widget.

Reverse-engineering the Apple II Profile interface firmware also revealed that there is a bunch of unused garbage code in the EPROM, and it's scattered throughout, rather than just being some leftover bits at the end. Unlike most shipped Apple firmware, the Profile interface firmware looks like it was a hack job by a relatively unskilled programmer, or at least a very sloppy programmer. By comparison, the Silentype interface card firmware is a work of fine art. The latter is not surprising as it was written by Andy Hertzfeld.

I have a Silentype card around here somewhere.  Didn't realize there was any demand or value in them.  Those really were a pretty horrible printer even back in the day.  Slow, lousy print quality and that thermal paper was not nice to deal with and turned colors or faded a lot of the time.

I've thought it wouldn't be too hard to build a ProFile emulator using something like a Raspberry Pi or an Arduino with an SD interface.  That might be interesting for people who have a ProFile interface card but don't want to put a lot of hours on their vintage hard drive mechanisms.

Timelord i just want to state i was able to find the serial sync card but im still in the market for a profile board.

If anyone has the Apple II Profile interface card with the 341-0271A EPROM, could you please make a dump available? I thought I had one, but apparently was mistaken. I only have the later 341-0299B.