I'm getting an unusual prompt when I hit reset on my mimeo.

After I hit clear screen and reset.

I assume I should be expecting this:

Everything else is fine, I get the Screen Full of _@ when I power on and a single @ when I clear the screen. The only surprise is this - so far.

Any ideas about what is going on?

You are right, after reset the / should be on the  first line and the @ (cursor) on the second line, because the monitor firmware outputs a linefeed character (use the force - read the source).

So it looks as if there is a defect in the line feed logic. Which is quite complex and difficult to understand / debug.

If you have a keyboard and the screen output for typical monitor commands is correct,  this would show if the linefeed / scrolling works correctly.

If not, try to swap the 2504 shift register at C11a with any other such IC first (wait a few seconds after power off before swapping ICs).

Now you feel some pain, but don't panic. Whoever sold you these parts probably did not test them in an Apple I.  Find the bad ones (or the walking wounded) and swap them for good ones and it should work.

I have built or rebuilt many 1970-1980s vintage microcomputers and arcade boards and the Apple I debug difficulty level is somewhere between a microcomputer and an early arcade board (such as Galaxian). So it's not insurmountable.

And yes, even when using New-Old-Stock ICs,  expect a bad one every 40-50 or so. There are many degradation / failure mechnisms present in ICs even with no power applied to them. I'm a semiconductor  industry insider and could tell you stories ...

Now, please allow me a curious question because you now do feel some pain: would you have paid a $100 premium for an IC set (complete) that was tested and burned-in for weeks in a Apple I and found good ?

I think such an IC set would greatly improve the chances for Apple I builders to have first time success, but it would come at a cost, as nobody will expend all that work and effort for naught. I would not do all that work for below $100.

Of course you are only sample size one, but maybe others lurking on this list would want to chime in and state their opinion about their willingness to pay a small premium for a known good IC set.

I don't know how many Apple I build projects were abandoned because the builders could not get them to work correctly. But I guess maybe 1 instant success out of 3 build attempts and 1 abandoned and used as a wall hanger ?

Thanks Bernie, I'll take my sweet time and give it a go - see if I can narrow down the issue that way. I've got an apple ][ keyboard, currently hooked up to a replica 1 so I know it works, I'll see what that does when I hook it up via a apple ][ / 1 keyboard connector. Then I'll start looking at the ICs.

Regarding your comments below:

Now, please allow me a curious question because you now do feel some pain: would you have paid a $100 premium for an IC set (complete) that was tested and burned-in for weeks in a Apple I and found good ? I think such an IC set would greatly improve the chances for Apple I builders to have first time success, but it would come at a cost, as nobody will expend all that work and effort for naught. I would not do all that work for below $100.

If there was an option for this when I ordered the parts from Unicorn I would have taken it. However, I like to build computers, I built the Replica 1 so I could test parts before putting them onto the mimeo. I expected there to be problems with the build and I would be stunned if I didn't have problems on the way. That is what will make it feel like a huge success when I get this thing working. I like to do this because it is difficult.

Ok - this is where I am so far.I've hooked up the the keyboard and I can clear the screen and hit reset a little more conviently than using a jumper.

There is no response from any other key.

I've noticed that I am missing an @ from the startup screen - it definetly was not missing when I populated the video section.

Does that mean anything? 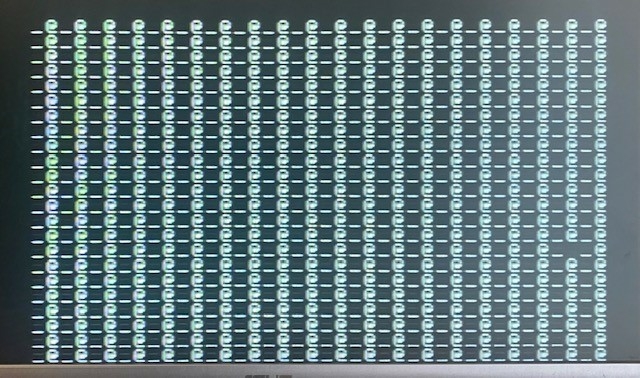 I'm going to go ahead and start swapping around ICs this weekend :)

This issue could also be RAM.  The monitor will most likely crash on the return from the screen output routine if the addressing or RAM is a problem since the stack is corrupt.  After printing the initial character the monitor seems to have has crashed.

I've replaced the ram, I now get the expected page full of _@

However, I am still getting the same issue - I'll re swap the ICs again - perhaps the bad ram compounded the problem.

Could you have an addressing issue?   Are you sure the RAM you swapped with are all good?

Prior to attaching the keyboard  the clear screen did apparently work and the reset did work and produce the wanted prompt ?

Then after attaching the keyboard nothing works ?

Conclusion: unplug the keyboard and try your previous routine again.

If so, wrong keyboard connection / hookup.

Note that nonfunctional RAM can also cause weird effects as Corey968 correctly states BUT  at least the clear screen and the reset and the first prompt should work as before.

As a general rule, if you debug something and a change makes things worse, first undo the change to see if you are back where you were before the change, or if there was some damage done, or something else did change which you did not intend to do.

Only when you can undo the change and you are back where you were before the change, you are certain that the change itself had the undesired effect.

I made a small gadget with an EPROM that plugs into both PROM sockets in lieu of the monitor PROMs. It has a small rotary switch to choose programs. Such as a screen output loop showing all characters in an endless loop, or  a TV typewriter, or same basic RAM tests, all of which do not need any functional RAM at all.

If you want it on a lend/lease basis contact me via the message system.

The clear screen and the reset work when I use keyboard or using the socket with pins.

For the moment - I'll put the keyboard back with my replica 1 - as there is no need to overcomplicate the troubleshooting with extra gear.

I've got a 2nd set of ram, so I've swapped the whole lot for the moment. Now there is the correct _@ screen when I start up.

However, the /@ problem remains. I've ordered the cheap TTL ICs I could not swap - should get in a couple of weeks and I will continue to trooubleshoot with what I've got until then. Hope nothing expensive is dead :)

Hi all - now that I have a bit of time (holidays) I can start to rebuild and check out my Mimeo to see if I can get it running this time.

I've populated the video section today and am getting the screen below. I believe this is to be expected.

After I short clear screen to +5 on the keyboard connector I get the below screen. The bring up guide tells me to expect a cleared screen, it does not mention a flashing @ symbol.

Is the screen below to be expected or is there a problem in the video section?

Your screen looks normal to me.  The "@" is the cursor and after a CLS that's all that should be displayed.

the clear screen with a flashing '@' cursor is what is expected after a CLRSCREEN key input.

The dot pattern is crosstalk which is normal and goes away when doing a few little mods - I found it helpful on my builds so see if all the counters and the refresh cycles etc. work as expected.

As to the video section, you can't declare victory yet before you typed in something like THE QUICK BROWN FOX JUMPS OVER THE LAZY DOG 0123456789!@#$%^&*() and saw exactly the characters typed and no some crippled ones.

If characters get crippled, the chief culprit are the 2504/1404 shift registers. You can tell from the stuck bits which one is it.

I'd say it's time for you the get a keyboard. I made a keyboard cable that is driven by a PC printer port. Lazy, but useful to auto-type programs into the Apple-1.

Thanks UncleBernie and PROMetheus, I'm confident to start building up the next part this week.

I'll let you know how it goes.

After clearning, checking and rebuilding the board I have

/@ prompt as expected and my keyboard, clearscreen and reset works fine.

My next problem is below: The test program does not work. 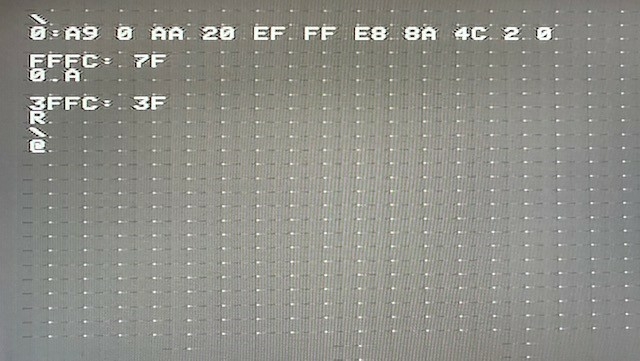 I think I'll move around some of the 2504's and replace some of the IC's I have replacements for and see if that helps.

Has anybody else seen this? Can you identify a specific cause for this issue? Suggestions are welcome :)

What I see looks more like a "processor section" problem and not any problem in the "terminal section", so moving the 2504 is pointless.

You should try to type the "Quick brown fox ..." as I did recommend. It may not work as a string as the JSR ECHO in the monitor firmware might crash is the stack RAM has a problem. But I think from the output you showed that the RAM works at least well enough to support a few function calls. Even if it crashes now and then you still should be able to type in and see all the characters on the keyboard without getting wrong ones. If the processor section runs flakey you will need a few RESET in between so to make it accept more keystrokes. But if you can type and see all the chars the Apple-1 supports with no wrong one shown, and the linefeed / scrolling also works, your terminal section is OK and you can leave all the ICs there alone.

If the processor section does not work properly, in most cases the DRAM is the culprit. Replace the 27K resistor at the timing oneshot with a 50K trimmer and using an oscilloscope adjust the output pulse of the oneshot to 480ns or more, but not less.

Try a 22k instead of the 27k for the one shot.  Makes the system dead reliable.   Also could be keyboard.  What keyboard are you using?  If you are using a keyboard that supports lowercase and defaults that way, the Apple-1 will display upper characters, but the commands may not work right.

I'm using an apple 2 keyboard and adaptor to apple 1.

How can I tell if the keyboard is pushing out the wrong characters?

If it's an Apple II keyboard you should be ok.  It doesn't support lowercase so you should be good.   Just in case there is something weird going on with it, have you tried you keyboard on an Apple II?   Personally I think it's the RAM refresh issue causing a stack problem and crashing wozmon.  The changing of the resistor should help with that.  Just be careful that area of the PCB isn't spaced out well and it's easy to have a minor short messing up the circuit that might only be visibible under magnification.  Try using a tooth pick between the solder pads to make sure you don't have a solder whisker or something shorting the pads between the cap and resistor in the wrong way.