As some of you who have followed me here on Applefritter know, I keep an "IC Graveyard" on top of my 1968 Shibaden VM-903U B&W monitor,  which is the right thing to do as this monitor also is dead (it died during my Apple-1 kit making mission but may be resurrected by my magic powers in the field of electronics).

This is the current state of the "IC graveyard": 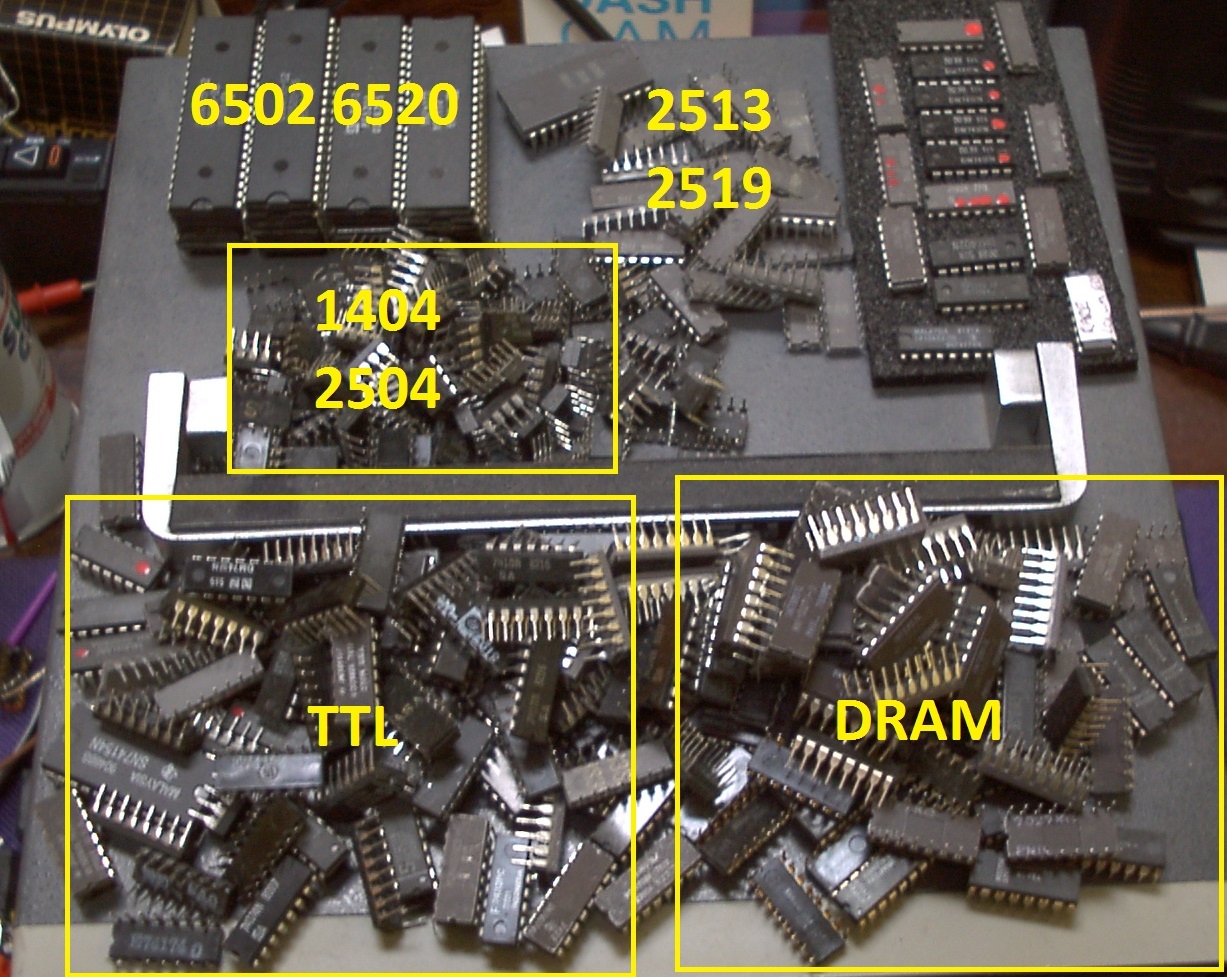 You can see that over the years, it got quite crowded. In post #7 of this thread is a photo of an earlier state (May 2021) of the "IC graveyard":

I now have quite robust statistics about IC failure rates when it comes to Apple-1 building. We should consider that most of these ICs are 30 - 45 years old, and even when ICs are  living in an IC plastic rail (aka "IC tube") in some warehouse, there are several deterioration mechanisms at work which may weaken or kill them. Hermetic CERDIP packages help but can't avoid formation of intermetallic compounds on the bond wires, where gold touches the aluminum metallisation layer of the die. These intermetallic compounds are higher ohmic and much more brittle, and combined with thermal cycles can cause problems. This is why I sell IC kits with 100% tested and burned-in ICs (4 weeks running 24/7 in an Apple-1 running diagnostics), to weed out those who would fail at the builder. And believe me, it is difficult enough to stuff ICs into an empty known-good Apple-1 (clone) motherboard and make it work (there always is the occasional bad IC) but worse, diagnose and find the fallout in the burn-in rigs. I check them every morning and if I find some symptoms of a disease (IC "infant mortality" - the infamous "bathtub curve") then the rig goes to a work bench and the search for the culprit begins. As I am one of the few people in the world who really understand all the intricate details on how the Apple-1 circuits are supposed to work, I can quickly narrow down the ususal suspects and then, finding the culprit is just a matter of swapping them out one by one.

Here are the good news:

It never happened that an IC dying during burn-in took other ICs with it. It also never happened that more than one IC died in burn-in at the same time - although I had some cases where ICs died in the first days and were replaced, and then some other ICs died in the next week(s) on the same rig. This is why any IC swap during burn-in resets the 4 week timer. I had only three burn-in rigs in the beginning so I could not keep up the one kit per week pace, but every test build I made was pressed into service as a burn-in rig, and in the end I had a dozen burn-in rigs running 24/7, which was even noticable in my electricity bill.

Here are the bad news:

Some ICs, when bad, can indeed destroy others. The DS0025 - if it went bad or is one of these Chinese counterfeit ones which are restamped industry standard MOSFET drivers built in a CMOS technology - and if this bad "DS0025" drives both of its clock outputs to -12V at the same time, then all the 2504/1404/AM2804 PMOS shift registers get shoot-through currents in every dynamic logic stage and they quickly get hot, until they die from the heat, which takes a few seconds at most.  ADVICE: if you don't see the '@_@_@_@ ..." pattern after power up, IMMEDIATELY turn off the power and remove all these shift registers from their sockets. Then check clock phases PHI3 and PHI4 to have non-overlapping negative voltage swings. You need an oscilloscope for that. Some bad TTL gates driving the DS0025 could cause the same damage mechanism, but I never saw that on the bench. I only saw cases where a bad TTL in locations C10, C12 or D12 (types 7408, 7402, 7404) would make one of the clock phases stuck at +5V and then the power up screen looks different BUT no shift register IC is in danger. The hazard with the Chinese counterfeits is that these are CMOS based and have no pulldown resistors in their input pins #2 and #4, so if these high ohmic input pins catch suitable random charges,  the damaging fault condition with both PHI3 and PHI4 being at -12V at the same time can happen.

You may remember that I have claimed that when using untested ICs for an Apple-1 build (as some 'maverick' builders do), the chance of first power up success (a fully functional Apple-1) is about 2:3, in other words, 2 out of 3 such builds succeed (67%) and 1 out of 3 builds fails (33%). These are those 'maverick' builders who then ruefully whine about their problems here on Applefritter, there are numerous such threads about failed builds, the most recent one is this candidate:

... and there are numerous other threads in which 'maverick' builders ask for help. They should have used one of my famous kits . . . you can't buy these IC sets cheaper if you buy them from here, there and everywhere in small numbers as an individual. I bought (in total) tens of thousands (!) of these Apple-1 ICs which went into my IC kits, so I got better prices ! (Send PM here in Applefritter to buy one of my famous IC kits directly from me --- available only as long as supply lasts !).

This said, we all know the rate of failure is high when using untested ICs. I think this is the main reason why every other seller of Apple-1 kits failed and eventually gave up. But I must correct / update my numbers. The 67% success rate was based on my early observations on a limited number of builds using untested IC sets, before I adopted the burn-in and started selling my famous IC kits. Now, with the statistics from the IC graveyard and using industry standard yield calculation methods, I must correct the expected success rate from 66% down to 40%.

Of course these numbers have to be taken with a grain of salt. Your mileage may vary because not every lot of ICs is the same and has the same failure rate. And despite literally tens of thousands of ICs went through my hands during all the years I produced my famous IC kits, the numbers of specimen per type are still quite low, except for the DRAMs and the 2504/1404/2804  (I did not calculate confidence bounds, sorry, no time for such nit-picking).

If you build an Apple-1, get a fully tested and burned-in IC set. This does not only mean my famous 'Uncle Bernie' IC kits, but any builder who has a fully functional Apple-1 can run it for a few weeks 24/7 and then pull a known good IC set out of it, and put an unknown IC set in. I've described the procedure as "step 3c" in the post #1 of this thread years ago:

So every owner of a known good Apple-1 clone can help other builders by producing known good IC sets. I regard the kits I have sold as "seeds" which went out to every continent in the world (except Antarctica).  There are only two kits left for this year (I stop shipping kits mid November 2022 and resume offering them mid January 2023) but once they are out of stock, they will be gone. After the last of my famous Apple IC kits has been sold somewhere in mid of year 2023, I rely on the "seeds" I have settled all over the world for continuation of the Apple-1 mission - this is YOUR call.

Comments invited - if enough people are interested in the more gory details which ICs are the worst offenders, I could write that up, too, but in the moment I am too busy with finishing the work on the Gen2 improved ACI. The PCB is proven fine, it's just a few measurements, simulations and writing the best BOM based on that data left. For the measurements I have to repair my spectrum analyzer first. So don't hold your breath ! These old and decrepit instruments are another Helloween horror story - they lurk in the basement, being undead, but not fully functional, and from time to time they emerge from their crypt to cause you nightmares trying to get them back into proper functional order.

I hope others will pick up he torch and help produce working IC sets once your kits are gone next year.  You've provided quite a service to this community with your reasonable prices and diagnostics help.

I would be interested in hearing more about which chips failed during your testing and which chips were rock solid.

I must say that the kit I got from you, UB has worked flawlessly. Maybe its not only the tested chips but the matched timing that makes it so stable.

I have NEVER had a crash (apart from self induced ones) and its been built totally as Apple intended.

It's pretty unlikely anyone will start making fully tested IC kits after Uncle Bernie's run out.  The supply of many of the critical parts is running low and what is available is getting super expensive.  I don't think Bernie is making much profit on this, probably basically nothing when you consider the amount of labor he's put into it.  And he bought a lot of his stockpile before prices started to climb so much.  So anyone starting out now would have to immediately start at much higher price point.  And anyone else getting into it would have a learning curve and probably have to invest in infrastructure of test gear and stuff too they'd need to compensate for.