Hi Everyone, I am quite a young vintage computer collector and never got to experience the era of BBS.  Upon looking through the internet I found that there are a few BBS's left that can be dialled into with an acoustic coupler.Description of problem

However, When trying to connect to a BBS, the monitor doesn't respond even though the Acoustic coupler is still able to maintain the call with the number I am connecting to.  I can hear a continuous tone from the coupler as well as random noise data coming from the phone handset. I am assuming this random noise coming from the listening end of the telephone handset is data coming in. Both the 'Transmit Data', 'Receive Data' and the 'Carrier Ready' lights are stationary and do NOT flicker. The Receive  lightone may occasionary go off and on but only briefly, the majority of the time it's on while the call is ongoing. Keep in mind the call does not drop for over 5 minutes but nothing shows up on the screen except what is shown in the photo at the bottom.    Transmit Data = XMT, Receive Data = RCV, Carrier Ready = CRX for photo reference.

More details of the system  below.

There were some other options but they included Vendors that I didn't have.

3. The parameters used in proTERM 300 Baud, 8N1 and Full Duplex. I am not sure if these settings need to match those on the DIP switches of the Apple Super Serial Card. There are many Variables that could be casuing this issue. The photo below illistrates the online parameters used.

The BBS I found called Level 29: The BBS is located at  "https://bbs.retrobattlestations.com/" and allows modems of 300 Baud to connect to it.

For the Telephone handset I am using a Western Electric Model 2500 DMG which connects to my router with Voip Capability.

I live in Australia where most of the analog POTS/PSTN has been phased out. The infrastricture has been replaced with HFC in my area and as a result, I am using VOIP. I have heard about the issues when using an acoustic coupler with VOIP but have also heard that if  the speed is low enough, there shouldn't be any issues. I figure 300 Baud is slow enough for it not to drop the call. (I hope dialing an american number isn't part of the problem.)PHOTOS: 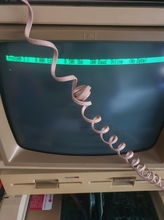 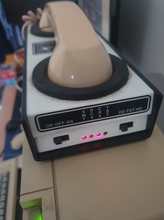 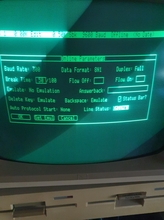 Do you know the brand?

Livermore star.I had to get it shipped from the US. Found it on eBay

A modem was usually connected with a straight connector.

I never used accoustic couplers. But later modems all used a pretty common standard with an AT command set. The important thing is: unlike a nullmodem connection, a modem starts up in command mode. So, the computer first talks to the modem. The computer used a series of AT commands, to setup baudrate etc. Eventually, once everything was set up, the computer would ask the modem to leave command mode - and start passing through the line data instead.

I don't know anything about your specific modem, but I'd guess that it won't work when you select the nullmodem driver in your terminal. The nullmodem driver would directly expect a raw data connection. It would never tell the modem to leave command mode and start passing the data.

Do you have a manual for your modem? I have no idea if the AT command set was already standard for accoustic couplers - or if other standards were used then. I'd first check details on its command-set. Then use a terminal program just to talk to the modem itself - to verify the cable and local setup is all fine. Once that is working, the next step is to set up the terminal program, so it can talk to the modem... It might be sufficient to configure the command (byte sequence) to make the modem switch to data mode.

I never used one. But I believe that has a test mode that can be used to test the connection to the Apple and take the phone line out of the equation. You take the receiver off the coupler and switch it to test (looks like it's labeled tst on the coupler switch). You should hear a loud tone that the coupler both generates and hears. For this to work, the room should be quiet. In test mode, the screen should show anything you type.

My 2c, get a Wimodem232 and call it a day if you want to connect to BBSs. Messing around with an acoustic coupler or any other pots modem isn't really worth it these days. Plus it opens up many more BBS options that are telnet only and no longer offer dial up.

WiModem232 is a great product. I own 2 myself, one I leave set up for Mac or IIgs and the other is configured for ProTerm on the IIe.

The issue you are experiencing is because the Super Serial Card cannot receive data from your modem unless the Carrier detect pin is asserted.

Because you have no carrier detect on the acoustic coupler you will not be able to receive any data from the modem.  Although...the SSC will allow outgoing communications.

The solution to this problem is a modified serial cable with a loop-back line from the DTR pin to the CD pin.

That will fool the SSC into thinking there is a call on-line.

It emulates a real modem (your IIe will not know the difference) and it will open up a whole world of telnet BBS systems (including mine - thebrewery.servebeer.com:port 6400)

There are 6 or so Apple II related BBS systems, and dozens of Commodore, Atari and others.

A "Null Modem" is a concept where two computers (or devices like computers) are connected together directly, without any actual modem used. Since you are trying to use a modem, you are specifically not utilizing a null modem.

The origin of these concepts is that communications need to define the function of each pin on the interface, including the signal direction (in or out). Since serial communications are very old—beginning in the electromechanical era—they don't have the ability to both send and receive over the same pin. So there is a pin over which data is only sent, and a pin over which data is only received. There are also many status signals, each assigned a permanent direction: in or out.

But as I'm sure you can appreciate, a signal sent out from device A at one end of a cable, is going in to device B at the other end. Even though the directions are permanent, they are relative to which end of the cable you choose to look at. The way serial communications makes sense of this is that it defines two different types of devices, called Data Terminal Equipment (DTE) and Data Communications Equipment (DCE). A normal cable, wired straight through, connects a DTE port (such as a computer serial card) to a DCE port (such as a modem). This means that a pin on the cable assigned to be TXD (Transmit Data) is interpreted to be transmitting from the DTE side to the DCE side, or in other words, the TXD pin on a DCE port is receiving data from the cable into that device. RXD (Receive Data) is likewise, mutatis mutandis.

So cables only connect DTEs to DCEs, which is fine when you have a typical remote connection using modems:

However, when connections are made locally between DTEs, the problem is that the pin definitions don't match up. Both DTEs use the TXD pin to send data, so it won't work to connect them with a cable that links the same pin on both sides together. The solution is to use a null modem, which simply means a box or cable that "crosses over" TXD with RXD (as well as the requisite status signals):

Note that the SSC has an onboard crossover when the jumper block is pointing towards "TERMINAL". You need to set it pointing towards "MODEM" to use the card as a DTE port. This is another quite confusing aspect of the card.

Since your modem predates the Hayes command set, it does appear correct to use the "null modem driver". In this mode ProTerm doesn't send any commands to the modem, but just assumes that connection is already established.

Bell 103 modulation is slightly different from ITU V.21 although they perform the same.

The SSC jumpers for baud rate, parity, and duplex can be overridden by software commands, so the ProTerm settings should take precedence.

If the modem doesn't provide CD, DSR and CTS status signals, there could be a problem because I don't see how you would turn hardware flow control off in the SSC.

A modem was usually connected with a straight connector.

I never used accoustic couplers. But later modems all used a pretty common standard with an AT command set. The important thing is: un

The issue you are experiencing is because the Super Serial Card cannot receive data from your modem unless the Carrier detect pin is asserted.

Because you have no carrier detect on the acoustic coupler you will not be able to receive any data from the modem.  Although...the SSC will allow outgoing communications.

The solution to this problem is a modified serial ca

Hi baldrick,I am a bit confused on what you mean by with regards to the modified serial cable with a loop-back line from DTR pin to the CD pin. You also mention that I have no carrier detect on the acoustic coupler. I have a Carrier Ready indicator that goes on when I make a call. Is that not the same thing?