Building my own SD card interface for the Apple II

i just tried it on another card with 4 partitions by copy loading the profile.2mg image to partitions 3 and 4, same issues.  i notice if i press open-apple key, the IIsd light will go out with the key presses or sometimes break with an onscreen error.  i ran apple //e diags via my SDisk II and diags checks out fine, no errors, shows my IIe is enhanced.  I also ran the apple diags against my 8mb 80 column card, it passed all apple diags, mem test and screen res tests.  i also ran the apple diags disk controller tests with my SDisk II and it passed all tests.

will the profile.2mg boot on a 64k enhanced IIe via the IIsd card?  my IIsd card must be working if it least brings up the copyright screen upon boot up.

thanks for the help!

sorry i was a little bit unprecise. It is necessary that the partitions are following to the other.

In simple words in my Apple Sytem I have to fill Partition 1 and 2 to boot from Slot7,

Then if everything is built correctly and working, your card must not be setup right.

I had to mess around with AppleCider for a while to get mine right  between the SD card reader, Admin privileges, and the correct steps in order to make it work...

well i've tried pretty much everything, even using winimg32 to write an image to the cards, always stuck on the IIsd boot copyright screen with led in, sometimes flickers like trying to load.   built another IIsd, same exact issues.

gonna order a couple different brands and see how that goes :)

well i've tried pretty much everything, even using winimg32 to write an image to the cards, always stuck on the IIsd boot copyright screen with led in, sometimes flickers like trying to load.   built another IIsd, same exact issues.

tried external sd card reader, still same issues.  it has to be an sd card issue or the way ciderpress is doing things.  i've &nbs

Please post back how you get on, and especially if you manage to find a solution as I have the same issues with the IIsd that a built a few years ago (mine is the original version from the first run).

i finally got my sd cards working with  the IIsd.  here's what worked for me:

select disk # (# is which disk your sd card is)

then did the same for the next two unknown partitions

and now the IIsd boots all my sd cards fine.

Sorry for the late answers, I was distracted with the restoration of a 1956 all-tube television. Challenging but intriguing!

@Barawitzka: Yes, for a HW1.2.x card only the firmware needs to be updated. A HW1.1 card may need a modification: and another mod may be needed for the first HW1.0 cards. The CPLD was last updated in March 2019, before the release of  HW1.2.1

@mikedanick: Great that you could solve your SD card issues! Maybe (or hopefully) this will be a solution for this issue that has plagued a lot of users. The AppleIISd uses direct access starting from address 0 on the SD card without a FAT or similar. Ciderpress uses the same scheme. Somehow on some SD cards address 0 seems not to be the same when accessed from Ciderpress and the AppleIISd. I still haven't found out why. I appreciate your input.

Please add me to the list of interested persons for either a kit or assembled version of your card.

would you mind someone modding your design and taking inputs that were previously mentioned in the forum and add them to the card?  of course full credit is still given to you on the card / design.

@mikedanick: I don't mind at all! To me, it is the idea behind open projects to be able to contribute. It would be best if the changes would be committed via a pull request on GitHub. That way all credits stay intact and it is transparent for everyone.

I also would not mind someone helping me with CP/M support. This was a feature request for a long time, but I know nearly nothing about the system or the Z80 CPU.

Can Anyone help me.

I recently got a AppleIISD board only. Its a sligtly different board from Freitz's original board, but basiclly it's the same. The person who made the board changed it so it could use a more readily available SD socket. I have been told the design has been tested and works the same as Freitz's board.

The problem I have is when I plug it into my IIe, the IIe fails to boot...no beep. Dead. Removing the card and the IIe works fine again.

(The IIe motherboard power LED is lit, and the LED on the AppleIISD is also constantly lit)

Is this all normal behaviour untill the Xilinx is programmed? Certainly seems strange.

Any help would be greatly appreciated.

m.b. the photo shows the board with a 74HC244 installed...this ha since been replaced with a z4HC245 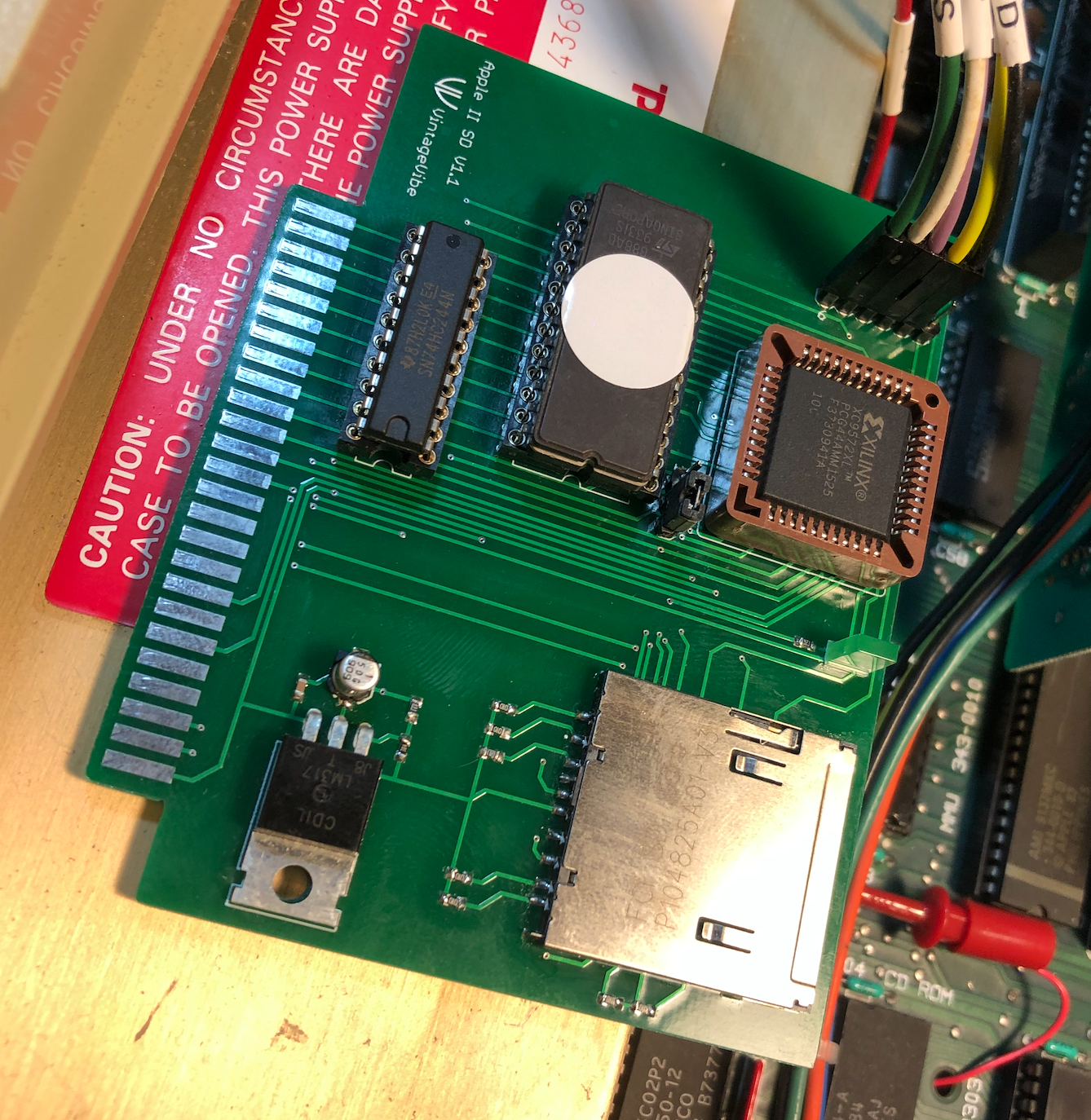 To program my xilinx I didn't plug my card (smd version) into my apple IIe, I just connected 5V and ground cable (you can use USB cable) temporary to my voltage regulator to give voltage to my cpld

Thanks alfard, Seems my Xilinx chip was a pull from China, and was already programmed (buss conflict!!!). As soon as I erased it, the IIe booted.

Now I seem to be having a similar issue to many others where the SD card is not booting. Will try some of the fixes mentioned above.

* Update. I was not able to try the DiskPart fix above as the SD card was not recognised as it is attached via a USB to SD adaptor...I wonder if the USB to SD card is part of my issue, and I wonder if other people who have had issues have been using USB to SD adaptors too...anyway, still working on it. Unfortunateley none of my PCs have SD card slots

Ok, I'm just going to put this here incase it helps others...

After building my AppleIISD from scratch (not a kit). I had a hell of a time getting it to work.

I would get the dreaded crash to monitor at memory address 0804. I tried so many different SD card (6 in total), tried doing DiskPart & Clean, tried using a dedicated SD formating software, tried doing it on 3 different machines...nothing worked.

But finally what did work for me was...

- DiskPart and Clean the SD card. Don't format it.

- Make sure that "Open as read-only" is deselected. Select the SD card's 'physical disk' from the list.

- Choose "Load from file" and load in a 32mb Prodos image. Ciderpress will create four 32mb partitions. (The first partition will be loaded with the image you just selected).

- Now the most important part...load a 32mb Prodos image into all of the other 3 partitions. I could not boot unless all partitions had some image loaded into them...so strange.

Anyway, I don't know if you need all of these steps, but certianly the last one was the trick form me...nearly 3 days wasted chasing the ghost in the machine...happy it works now.

This is my first post here, because I just got my first Apple II, a IIgs to be exact...

I spent some time online to get neccessary add-on to get started. Got 8MB RAM from Garretts Workshop and now your Apple II SD.

I followed all the instructions, even installed Windows on my Mac in a Boot Camp partition, just to use Ciderpress ;)

Now I created some partitions and put the ProFile image in the first one, but it does not want to start. Always prompts into the monitor, just showing the copyright notice, so I can at least see that the device is present.

Shouldn't I see at least the SD drive somewhere on the desktop?

Can you guys tell me what I'm missing here? Please see my screenshots.

I always wanted a IIgs in my collection, but I didn't expect it to be so difficult to get it work...

Thank you so much in advance! 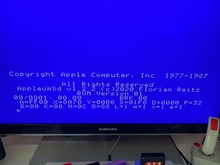 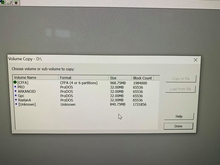 After messing around with my card for a long time and trying various options (Formatting it in the Mac, formatting it in Windows), trying to write four identical Partitions to see if one worked... I gave up. Now today I purchased a new card. The smallest I could get, 4GB... not even SD, it's MicroSD with an Adapter, but I made good experiences with them in my Everdrives, so I gave it a try.

At the first try: nothing new. I could not create a Partition 1 that boots in any way. So I tried to format it with another tool. At first, nothing changed, but I put the ProFile Image in the first one and in the three others i put the Total Replay Archive and now, after some more tries, I got a ProDOS prompt at last.

Not familiar with commands and the programs, it took me a while to get used to it, but with the "Selector" I found that all my four partitions are present, and I could select my disk drive there, so I booted from disk to see if the desktop changed. Yes, it did - but only the first two partitions showed up. I assumed it's because the system on the disk was too old - and it showed that I was right.

The 6.0.4 image from whatistheapple2gs was a pain. I could not write it into the first partition. In all the others it was possible... so I figured out how to create a new image file in Ciderpress and copied the contents of the other file in there - and tadaaa: I could copy it into the first partition and everything is fine - system 6.0.4 now boots from SD and all four partitions are present. Me happy. :)

Now there's some more for me to ask... first: is there a german version of 6.0.4 somewhere available as a live install like the 6.0.4 I found on the website?

And how do I get all these games to work from hard drive? When I put them into a partition some worked, but that's surely not the way to got, isn't it?

Thank you for listening :)